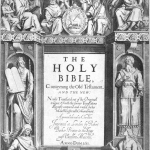 It Is Written – And Still Is! – By Daniel Sheridan

“…As in Adam all die, even so in Christ shall all be made alive.” The Apostle Paul.

The word of God is the foundation of our faith. Faith isn’t “positive thinking;” Faith is accepting God’s testimony. When we have faith, we are giving God credit for telling us the truth. The belief in the Salvation of All stands on the rock-solid authority of Holy Scripture. If the Hebrew Scriptures are a “myth,” or an “allegory,” or anything short of what the Lord Jesus Christ says they are – historical truth – then what Paul wrote in the above passage is meaningless. As a result, both Paul and our Lord Jesus would be false witnesses! The same is true of the Greek Scriptures.

God has preserved His word. The Hebrews copied their Scriptures with careful hands and have passed them down from generation to generation. The Lord Jesus put His stamp of approval on those Scriptures when He said,

“These are the words which I spake unto you, while I was yet with you, that all things must be fulfilled, which were written in the law of Moses, and in the prophets, and in the psalms, concerning me. Then opened he their understanding, that they might understand the scriptures…” Luke 24:44-45

In that statement, the Lord mentions the three primary divisions of the “Old Testament.” Those Scriptures are precisely what we have in our common Bibles today (not the same order, but the same content; excluding the Apocrypha which is not part of the Old or New Testaments).

As for the Greek Scriptures, the Divine Author has gone to great lengths to preserve His word and maintain its integrity. He has done this in three ways:

1. Copies (Including, “Lectionaries”)
2. Versions
3. Quotations from the Fathers

“By causing that a vast multiplication of COPIES should be required down the ages, – beginning at the earliest period, and continuing in an ever-increasing ratio until the actual invention of Printing,–He provided the most effectual security imaginable against fraud… NEXT VERSIONS. The necessity of translating the Scriptures into divers languages for the use of different branches of the early Church, procured that many an authentic record has been preserved of the New Testament as it existed in the first few centuries of the Christian era… Lastly, the requirements of assailants and apologists alike, the business of Commentators, the needs of controversialists and teachers in every age, have resulted in a vast accumulation of additional evidence, of which it is scarcely possible to over-estimate the importance. For in this way it has come to pass that every famous Doctor of the Church in turn has quoted more or less largely from the sacred writings, and thus has borne testimony to the contents of the codices with which he was individually familiar. PATRISTIC CITATIONS accordingly are a third mighty safeguard of the integrity of the deposit.” Dean Burgon, The Revision Revised.

The evidence of the copies is overwhelming. Most of the ones we have today are from the tenth through the twelfth centuries, yet without question, they are copies of older manuscripts which faithfully represent what the Apostles wrote (See the works of F. H. A. Scrivener for the details).

There are only a handful of manuscripts containing the works of Herodotus, Thucydides, and Sophocles, and these are over 500 years removed from the originals. Nobody, however, questions the integrity of these works. God’s word, unlike these classics, has thousands of witnesses! The text of the New Testament has more supporting evidence than the writings of the Greek legends.

Open your Bibles and drink from the fountain of pure truth!

“A glory gilds the Sacred page
Majestic like the Sun,
It sheds its light on every age
It gives, but borrows none.”

We can say with authority that “as in Adam all die, even so in Christ shall all be made alive.”