The Renaissance was an intellectual revolution, a revival of interest in things concerning this life. Science, letters, original documents, painting, and other areas of human endeavors captured the imagination of Renaissance men.

One of the most significant Northern Renaissance scholars of the sixteenth century was born on October 28, 1466, Erasmus of Rotterdam. Protestant and Catholic reform movements can be traced back to him. Erasmus revolutionized education by integrating the study of ancient literature with Holy Scripture, and his beliefs about the Christian life inspired generations. He traveled extensively, living in places like Germany, England, Switzerland, France, and Italy; he corresponded with every thinker of his day; he was friends with Pope Leo the Tenth, Emperor Charles the Fifth, and many French and English leaders. And yet, for all that, in the end, neither the Catholics or Protestants claimed him as their own.

His father, a priest, instilled into Erasmus a love of the classics and ancient literature. Erasmus followed his father’s footsteps and was ordained a priest in 1492, but he didn’t like the lifestyle. He studied theology in Paris, and then in 1499, Erasmus met a man in England who would change the course of his life – John Colet. Colet, who would become the Dean of St. Paul’s, encouraged Erasmus to pursue other studies on top of the classics and to use that combined knowledge in the service of Scripture and the church. Erasmus accepted Colet’s challenge and began to study Greek, which he mastered very quickly. Erasmus soon put this wealth of knowledge to use, creating works that influence us to this very day.

Erasmus published the first of many volumes of adages in 1500; these were proverbs drawn from Greek and Latin learning. Soon after that, he wrote Handbook of the Christian Knight, which was inspired by the wife of a knight who was embarrassed by her husband’s uncivilized behavior. Erasmus later expanded that work into what became known as the Enchiridion. “This is an appeal on Christians to act in accordance with the Christian faith rather than merely performing the necessary rites.” He translated the Greek classics, the Church fathers, wrote paraphrases and summaries of Scripture, and a volume which he dedicated to Thomas More called “Praise of Folly” in which he makes fun of medieval superstitions, ceremonial religiosity, and prejudices. 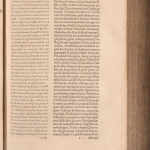 Instrumentum. The original version contained his Greek text along with the Latin Vulgate – a side-by-side “parallel Bible.” A later edition included the Greek and his Latin Translation. Erasmus’ goal was to provide the original Greek with an accurate translation. This work alarmed church leaders as they contained notes on the text, which they felt undermined the authority and traditional interpretations of the church.

Erasmus, a life-long Catholic, came to believe his church had become corrupted by superstitions and bad practices, which were contrary to Scripture, and he called for a return to primitive Christianity. His studies in church history convinced him that the faith became distorted by the combination of politics and violence – a church-state amalgamation which was the result of departing from the simplicity of the New Testament.

Many associated Erasmus with Luther because they held similar views. For instance, Erasmus called for reforms, encouraged a sincere faith over the mere ceremony, and he desired that ordinary people should read the Bible in their native language. Erasmus, however, never joined the reformers believing men like Luther went too far. He feared their course was leading to violence and revolution, and he wanted nothing to do with that. Erasmus, though criticizing his church and his Pope, never called for anyone to leave the church or deny the Pope’s authority.

Erasmus and Luther knew each other and debated a particular issue. “Luther, during the years of the first part of the 1520s, engaged in a sharp exchange upon whether human beings have free will in the question of salvation. Erasmus, for his part, wrote a work that was fairly reserved, polite, and elegantly argued. Luther, in turn, wrote a much longer text called The Bondage of the Will, in which he assaulted Erasmus again and again.”

Catholic leaders asked Erasmus to defend Catholicism against the Protestants, but he refused. Erasmus seemed to stay on the sidelines of this battle, and both sides condemned him for it. I don’t.

Erasmus was an optimist who wanted manageable change; here a little, there a little, line by line, easy-peasy, so that the people could maturely process the new information. He believed education, the classical languages, and the faith, would gradually transform the church and produce a Christ-like people. All of his works were dedicated to these ends.

Erasmus’ New Testament was invaluable to the Reformers. Believing the Latin Vulgate contained errors, Erasmus published his Greek New Testament in 1516, hoping it would be translated into the native tongues of ordinary people. Erasmus saw his wish come true in his lifetime as translators translated his text into the vernacular, and the new printing presses were spitting out copies that landed in the hands of his intended audience.

Erasmus, a life-long student, never retired from his work. He continued his labors until his death in 1536. Erasmus died without a party; neither the Catholics nor the Protestants claimed him. We’ll take him, however. Thanks for the work, buddy.

“Erasmus was the prince of Humanists and the most influential scholar of his age. He ruled undisputed sway as monarch in the realm of letters. He combined brilliant genius, classical and biblical learning, keen wit and elegant taste. He rarely wrote a dull line. His extensive travels made him a man of the world, a genuine cosmopolitan, and he stood in correspondence with scholars of all countries who consulted him as an oracle. His books had the popularity and circulation of modern novels.”

Erasmus penned one of my favorite quotes:

“When I have a little money, I buy books; and if I have any left, I buy food and clothes.”