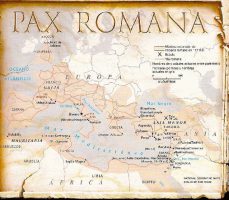 The history of every ancient nation ends and the history of every modern nation begins with Rome. Under Caesar Augustus the Pax Romana (Roman Peace) began. This is a period of a little over 200 years (30 B.C. – 180 A.D) of peace and prosperity. The rights of people and property were protected. The conquered nations, though they had much they could complain about, “enjoyed greater security against domestic feuds and foreign invasion, a larger share of social comfort, and rose to a higher degree of secular civilization. The ends of the empire were brought into military, commercial, and literary communication by carefully constructed roads, the traces of which still exist in Syria, on the Alps, on the banks of the Rhine. The facilities and security of travel were greater in the reign of the Caesars than in any subsequent period before the nineteenth century. Five main lines went out from Rome to the extremities of the empire, and were connected at seaports with maritime routes. ‘We may travel,’ says a Roman writer, ‘at all hours, and sail from east to west.’”

“Peace was accompanied,” wrote Kenneth Scott Latourette, “by the growth of roads and commerce. The Roman roads are famous. They made possible more extensive and more rapid travel then in many sections had ever before been possible. The suppression of piracy increased the sea-borne commerce. Political unity and the removal of burdensome restrictions favored trade. Roads and commerce facilitated the movements of groups, individuals, and ideas. It was not an accident that Christianity expanded first along the trade routes and had most of its earliest strongholds in cities from which commerce radiated.”

The Romans took over from the Greeks. It has been said that the conquered Greeks taught their conquerors, and that is true. “The propagation of ideas,” says Latourette, “was furthered by the wide use of the Greek language. From at least the time of Alexander the Great and the subsequent extension of Greek culture, the Greek tongue gained currency along the avenues of commerce and in a large portion of the chief cities. In Roman times in the eastern and to a somewhat less extent the in the western portions of the Empire Greek was spoken and read extensively in many of the chief centers of population. Even the Roman, conqueror though he was, had long borrowed from Greece. Many Romans were familiar with the Greek language. This Greek, moreover, although it had arisen out of several dialects, had a common form in all the far-flung Greek-using communities in the world of commerce. Any religion, therefore, which could gain a foothold in the Greek-using sections of the population and could create a literature in Greek would have an opportunity to reach most of the provinces of the Empire.” We might also add that, although it would change later, there was for the most part tolerance of multiple religions in Rome.

The people at this time were no longer satisfied with the old gods. Some philosophers – Stoics, Epicureans, and Skeptics – despairing of life thought that the way to happiness was by withdrawing from the world; others sought escape through satisfying every urge of pleasure. Of course the common people and the poor couldn’t afford to indulge in these foolish behaviors. With the old gods dead, and Roman peace providing some security, people began to think of Rome as their great savior. There are no religious vacuums! People must worship something. But the heart will continue restless until it rests in Christ.

Jesus Christ came into the world during this time of peace, with its universal language, and with the people hungering with universal longing, under Caesar Augustus, the first Roman emperor, before the death of king Herod the Great, four years before the traditional date of our Dionysian era. He was born at Bethlehem of Judaea, in the royal line of David, from Mary. The world was at peace, and the gates of Janus were closed for only the second time in the history of Rome.

There is a poetic and moral fitness in this coincidence: it secured a hearing for the gentle message of peace which might have been drowned in the passions of war and the clamor of arms. Angels from heaven proclaimed the good tidings of his birth with songs of praise; Jewish shepherds from the neighboring fields, and heathen sages from the far east greeted the newborn king and Savior with the homage of believing hearts. Heaven and earth gathered in joyful adoration around the Christ-child, and the blessing of this event is renewed from year to year among high and low, rich and poor, old and young, throughout the civilized world.

“Jesus was born into a world,” writes Clarence Carson, “in which there was a great longing for universality. And He brought a universal message. He taught that God is the universal Father, that He is a spirit, that He is unbounded love, and that He yearns to be at one, to atone, for men. He revealed by his life that there is a better way than the use of force, that there is a better way than military conquest. It is the way of love, of service, of persuasion, of influence, of kindliness, and of sacrifice. It is the way of life, He said… The crucifixion was not the end. Jesus of Nazareth was put to death at the place called Golgotha, but Christ arose from the dead. The might of Rome, the greatest empire that had ever been, was unable to silence Him. Love bested force, and Sacrifice triumphed over the sword. Thus, the Revelation was completed.”

Let us thank God Who arranged the world thusly in “the fullness of time” in order to send His Son to be the Savior of the World. He was truly “born to raise the sons of earth.”