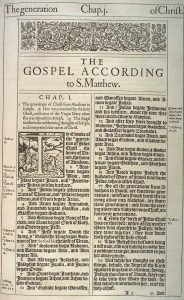 The Matthew of the Gospel Bearing His Name – By Daniel W. Sheridan
Matthew, also known as Levi, was a native of Galilee and one of the twelve apostles. When our Lord first met Matthew he was working for the Romans as a publican or tax-collector at Capernaum. Such an occupation implies that Matthew was probably conversant in both Greek and Hebrew as Galilee was bilingual, and this would require him to keep his accounts in both languages – a talent which will be put to greater use when writing his gospel. But this position would most certainly have made Matthew the object of hatred and ridicule by many of his own countrymen as it was thought that only a traitor to his people and one who forsook Messianic hopes would have taken a job such as this with his people’s conquerors.
One day, as Matthew sat in his custom house near the seaside, the Savior of the World called Matthew into service. No doubt he made sure the accounts of his business were honestly settled with his employer, and then Matthew gave up that work to serve our Lord Jesus Christ. He retired from service to the Roman Emperor, and became in the employ of the Emperor of the Universe.
Matthew, to celebrate his new “career,” held a feast in his home. The Lord and his disciples were invited as well as many of Matthew’s former tax-collecting associates and other characters who were odious to the Pharisees. “We may conceive,” one wrote, “what a joyous banquet that was for Matthew, when he marked the words and acts of Jesus, and stored within his memory the scene and the conversation which he was inspired to write according to his clerkly ability for the instruction of the church in all after ages.”  At this very banquet in the presence of Matthew and the Pharisees, Jesus said “I came not to call the righteous, but sinners.” These words would have caused the Pharisees to cringe as they in their self-righteousness labeled men like Matthew and his friends sinners. Matthew and his friends, however, would have taken great comfort in those words.
This publican’s gospel is the first thing that occupies our attention when we open the New Testament. God, characteristic of His limitless grace, uses a man who was considered a traitor to his own people to write the gospel of the Kingdom of God, of the King of kings, the Sovereign of the Universe, the Savior of Mankind. What a wonderful display of the tenderness of our God! Later, our same God uses Mary Magdalene, from whom Christ expelled many demons, to announce the good news of the resurrection of Christ!
Matthew’s gospel is the great link between the Old and New Testaments. Matthew quotes the Old Testament something like sixty times and applies the passages to Christ or current events that were unfolding at the time of our Savior. Messianic prophecy is brought to life with Matthew’s constant refrain, “that it might be fulfilled,” or “then was fulfilled.” The gospel begins with “God with us,” and it ends with “Lo, I am with you alway.”
“And she shall bring forth a son, and thou shalt call his name JESUS: for he shall save his people from their sins. Now all this was done, that it might be fulfilled which was spoken of the Lord by the prophet, saying, Behold, a virgin shall be with child, and shall bring forth a son, and they shall call his name Emmanuel, which being interpreted is, God with us.”