Images of Luther throughout the world portray him as an imposing figure with Bible in hand. Luther’s greatest accomplishment was making the Bible readable by all the people in the world, not just the elite. Luther grew up in a time when virtually nobody read the Bible, it only existed in Latin as translation into common tongues was outlawed. But the people were so hungry for God’s Word that fragments of the Scriptures were translated at great risk to the translators.
Luther loved the Bible because he believed it gave him the very thing he longed for – forgiveness of his sins from the resurrected Jesus Christ. Luther suffered from severe anxiety and depression because he was terrified of orthodox teaching concerning eternal damnation. Through study of the Scriptures he found out that God wasn’t angry with him, that God was a merciful God who loves, forgives, and gives life to sinners. This is why Luther wanted everyone to have access to this life-saving book. 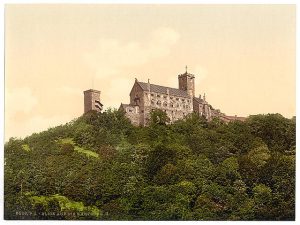 —Luther’s New Testament
Luther was excommunicated by Leo the 10th in 1521, a year later Emperor Charles the Fifth banned him from the Holy Roman Empire. Duke Frederick the Wise, to keep him safe, kidnapped Luther to the Wartburg Castle. Luther, while there, translated the New Testament in eleven weeks. It was called the September 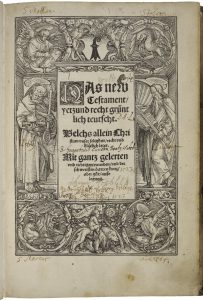 Testament because it was published in September, 1522. Luther relied on Erasmus’ text and annotations for this translation.
—Luther’s Old Testament
Luther also translated the Old Testament from the Masoretic Hebrew text – it was called Masoretic because the Masoretes, tenth century Jewish scribes and scholars, inserted vowels into the Hebrew text. Luther’s decision to return to the Masoretic text was a monumental decision.
Hebrew was spoken among Jews, a people who were socially, economically, and politically marginalized. Few institutions offered Hebrew, so Luther learned the language and spoke with converted Jews about Hebrew and associated customs because he wanted the best translation possible. Luther completed the Old Testament translation in 1534 after twelve years of labor, and he spent the rest of his life perfecting this work. This translation differed from the Vulgate and Septuagint as it did not include certain additions to the text contained in these versions, the Apocrypha for example.
Luther’s translation changed everything about the way people read, think, and act. Luther’s ideas still influence how we see ourselves and our world.
Without this work, people like us would not have been able to search the Scriptures and find out that Jesus Christ is truly a #SuccessfulSavior!