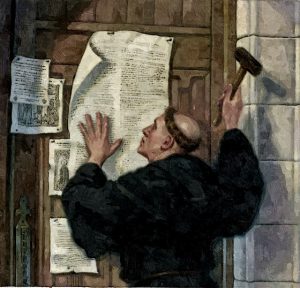 Martin Luther, a Catholic Priest, became convinced that certain practices and beliefs of his Church were errors that stealthily crept in throughout previous centuries. He put his concerns, his “95 Theses,” in writing and posted them on the door of the Wittenberg Church, on October 31, 1517, intending to spark a debate among Church leaders. Contrary to his wishes, the theses were translated and dispersed among the common people causing great agitation among the masses.

In those days, the Church and state were joined at the hip; the doctrines of the Church were state-enforced. The king, nobles, and clergy ran everything, while ordinary people, who were in the majority, were oppressed. It was a top-down fixed system.

At first, Luther didn’t want to leave his beloved Church; he wanted to reform it. But the rulers of the powerful Church-State system didn’t want reform. The Pope expelled Luther on January 3, 1521, for his writings. Three months later, on April 17, Luther was summoned to either renounce or reaffirm his beliefs at the Diet of Worms, which had been in session since January 28. Appearing before the august crowd consisting of the religious hierarchy, nobles, and the king, they asked Luther if he was willing to renounce the teachings contained on a table stacked with copies of his writings. Luther, perplexed over this tactic, requested time to think about his answer. Granted an extension, Luther prayed, consulted with friends, and then presented himself before the Diet the next day.

Luther was asked again if he was willing to retract those writings. He apologized for the harsh tone of many of his works but declared that he couldn’t reject the teachings they contained. He respectfully, but boldly stated:

“Unless I am convinced by proofs from Scriptures or by plain and clear reasons and arguments, I can and will not retract, for it is neither safe nor wise to do anything against conscience. Here I stand. I can do no other. God help me. Amen.”

This statement was the seed of a future society based on liberty of conscience; it marked a turning point in European History. By respectfully declaring that the Church had no authority to enforce a belief, Luther was not only challenging the Church but the Civil Government as well.

Luther wasn’t asking for much. He simply wanted, nay pleaded with, the leaders to convince him through persuasion and reason, not force, that he was wrong. He was willing to admit his error if presented with evidence and sound reasoning. The hierarchy, however, wasn’t interested in reason.

On May 25, 1521, the Diet of Worms ended when Charles V, Holy Roman Emperor, issues the Edict of Worms declaring Martin Luther, an outlaw.
The Reformation was underway.

Luther and his followers dispensed with many practices they felt were contrary to the original intent of Scripture. Luther held that the individual approaches God directly through Jesus Christ without the need of any human intermediary. Thus, in the spirit of the Renaissance, the individual was emerging from the massive, top-down, hierarchical, corporate religious structure.

The Reformation didn’t bring total religious freedom, but it was a huge first step in that direction. Original intent, individual dignity, and freedom of conscience are the principles which emerged out of the Reformation. Europeans brought these ideals to the American Colonies, shaped them to their American experience, and slowly improved them over time.

Americans of all colors and creeds are today guaranteed complete liberty of conscience and individual rights. We are also sticklers when it comes to original intent when interpreting and applying our Constitution, our laws, and even our Bibles. In America, tyrannical overlords, both political and religious, were ousted over time. We have abolished slavery and enforced religion.

What other reforms do we still need to implement? May God grant us the wisdom to discern and the virtue to pursue the changes needed in our day. Let us never stop reforming because “reproofs of instruction,” wrote the wise King Solomon, “are the way of life.”