Patrick said that he went where no man had gone before. That expression, which is still in use today, we probably got from St. Patrick. In his day heading out to parts unknown was extremely hazardous, and only a few tried. Patrick, despite the dangers, was driven to fulfill his mission. 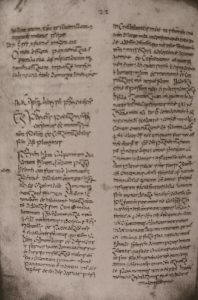 “My name is Patrick. I am a sinner, a simple country person, and the least of all believers. I am looked down upon by many. My father was Calpornius. He was a deacon; his father was Potitus, a priest, who lived at Bannavem Taburniae. His home was near there, and that is where I was taken prisoner. I was about sixteen at the time… I was taken into captivity in Ireland…It was there that the Lord opened up my awareness of my lack of faith. Even though it came about late, I recognized my failings. So I turned with all my heart to the Lord my God…Although I am imperfect in many ways, I want my brothers and relations to know what I’m really like, so that they can see what it is that inspires my life…”

Drive and humility characterized Patrick’s mission, a work that changed the Irish people and the world at large.

Patrick, the story goes, was born in Roman-controlled Britain. One day, as a young boy of sixteen, he was kidnapped by Irish pirates and taken to Ireland and enslaved. While there, Patrick, as he wrote in his Confessions, was awakened to his need to know and serve God. After six years of slavery and spiritual renewal, Patrick grew convinced that he was called to go back home to England. Patrick, fleeing from his master, walked over 200 miles to the port and then returned to England. After many adventures and years of study, Patrick was ordained a Priest.

One day, Patrick believed he heard the voice of the Irish calling to him. He heeded the call and returned to the place of his enslavement as a passionate missionary to his former captors.

Patrick succeeded in bringing Christianity to Ireland, but it was a different sort, a revised version of the faith that emanated from Rome. Unique circumstances in Ireland account for this. The Ireland of Patrick’s day lacked villages from whence parishes emerged, and cities where dioceses were formed. As a result, the Irish church, not having a centralized religious authority, was “anchored by monasteries which became not only religious sites of scholarship and spirituality, but economic and market centers…” The Irish molded Christianity to their own experiences.

Patrick was ahead of his time in that he empathized with women and became one of the first righteous voices to denounce slavery. His version of Christianity was brighter than the gloomy and fearful versions emanating from Europe. Patrick “could see,” wrote Malachy McCourt, “God’s glory in the natural world about him, and could concentrate on the natural God-given joy of life rather than the sin of man’s soul.”

In keeping with this joyous spirit, Patrick did not “as other missionaries in other places would later, condemn the Celts as ignorant infidels or uncouth Pagans. Instead, he took the Druidic world and tried to explain it in Christian terms.” Patrick, instead of driving people away by stern condemnations, sought to win people’s hearts.

As a drop of ink makes millions to think, “perhaps most important of all, Patrick’s importing Christianity to Ireland brought ‘writing,’ a skill that would not only advance Irish civilization immeasurably but, would also save the civilization of the western world” (Malachy McCourt, History of Ireland).

“With the Irish,” wrote Thomas Cahill, Saint Patrick “succeeded beyond measure. Within his lifetime…the Irish slave trade came to a halt, and other forms of violence, such as murder and inter-tribal warfare, decreased.” He also inspired men who “by their way of life reminded the Irish that the virtues of lifelong faithfulness, courage, and generosity were actually attainable by ordinary human beings and that the sword was not the only instrument for structuring a society.”

Joy, combined with self-sacrificing love, not the sword, wins affections and transforms lives.

“The Romans,” concludes Cahill, “are the rich and powerful who run things their way and must always accrue more because they instinctively believe that there will never be enough to go around; the catholics, as their name implies, are universalists who instinctively believe that all humanity makes one family, that every human being is an equal child of God, and that God will provide. The twenty-first century…will be spiritual or it will not be. If our civilization is to be saved – forget about civilization, which, as Patrick would say, may pass ‘in a moment like a cloud or smoke that is scattered by the wind’ – if WE are to be saved, it will not be by Romans but by Saints.”

T.W. Moody and F.X. Martin The Course of Irish History