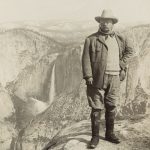 In this speech from 1899, Teddy Roosevelt tells Chicagoans how they contributed to “Making America Great.” Are you doing your part? TR’s vision was much deeper than a partisan and shallow campaign slogan. I hope you take the time to read this very short exhortation. #MAGA

“A life of ignoble ease, a life of that peace which springs merely from lack either of desire or of power to strive after great things, is as little worthy of a nation as of an individual… Who among you would teach your boys that ease, that peace, is to be the first consideration in their eyes – to be the ultimate goal after which they strive? You men of Chicago have made this city great, you men of Illinois have done your share, and more than your share, in making America great, because you neither preach nor practice such a doctrine. You work yourselves, and you bring up your sons to work. If you are rich and are worth your salt, you will teach your sons that though they may have leisure, it is not to be spent in idleness; for wisely used leisure merely means that those who possess it, being free from the necessity of working for their livelihood, are all the more bound to carry on some kind of non-remunerative work in science, in letters, in art, in exploration, in historical research-work of the type we most need in this country, the successful carrying out of which reflects most honor upon the nation…Far better it is to dare mighty things, to win glorious triumphs, even though checkered by failure, than to rank with those poor spirits who neither enjoy much nor suffer much, because they live in that grey twilight that knows neither victory nor defeat.”