In the churchyard at Williamsburg is a tombstone to the memory of Ann Burges, wife of Rev. Henry John Burges, of Isle of Wight, who died Dec. 25, 1771, in giving birth to an infant daughter. The inscription reads: 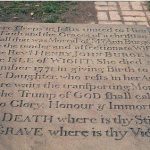 “Here sleeps in Jesus united to Him by faith and the Grace of a Christian life, all that was mortal of Mrs. Ann Burges, once the tender and affectionate wife of the Rev. Henry John Burges, of the Isle of Wight: She died 25 December 1771 in giving birth to an infant daughter who rests in her arms. She here waits the transporting moment when the trump of God shall call her forth to glory, honor, and immortality. Oh death where is thy sting? Oh grave where is thy victory?”

This family understood the hope of resurrection as did reformers William Tyndale and his good friend John Frith. These men suffered for their Biblical faith and were both burned at the stake for teaching the true gospel. But their answers to their opponents defending the true nature of death and the hope of resurrection remain unanswerable by those who believe death is really life in another place. Death is not being “with Jesus,” or being “present with the Lord,” or being “promoted to glory,” as if heaven is currently being defiled (Numbers 19) by contact with dead people. Death always has been and always will be an enemy. Death isn’t life in any way, shape, or form. This is why our gospel is about resurrection. Many are asking the wrong question, “Where will you go when you die?” The right question is, as Job asked it, “If a man die, shall he live again?” Ask the right question and you are on your way to truth which sets us free.

“The true faith putteth the resurrection, which we be warned to look for every hour. The heathen philosophers, denying that, did put that the souls did ever live. And the pope joineth the spiritual doctrine of Christ and the fleshly doctrine of philosophers together; things so contrary that they cannot agree, no more than the Spirit and the flesh do in a Christian man. And because the fleshly-minded pope consenteth unto heathen doctrine, therefore he corrupteth the Scripture to stablish it.” William Tyndale

“And when he (i.e. Thomas More) proveth that the saints be in heaven in glory with Christ already, saying, ‘If God be their God, they be in heaven, for he is not the God of the dead;’ there he stealeth away Christ’s argument, wherewith he proveth the resurrection: that Abraham and all saints should rise again, and not that their souls were in heaven; which doctrine was not yet in the world. And with that doctrine he taketh away the resurrection quite, and maketh Christ’s argument of none effect.” William Tyndale

“Nay, Paul, thou art unlearned; go to Master More, and learn a new way. We be not most miserable, though we rise not again; for our souls go to heaven as soon as we be dead, and are there in as great joy as Christ that is risen again.” And I marvel that Paul had not comforted the Thessalonians with that doctrine, if he had wist it, that the souls of their dead had been in joy; as he did with the resurrection, that their dead should rise again. If the souls be in heaven, in as great glory as the angels, after your doctrine, shew me what cause should be of the resurrection.” William Tyndale

“Notwithstanding, let me grant it him that some are already in hell and some in heaven, which thing he shall never be able to prove by the Scriptures, yea, and which plainly destroy the resurrection, and taketh away the arguments wherewith Christ and Paul do prove that we shall rise;… and as touching this point where they rest, I dare be bold to say that they are in the hand of God.” John Frith

The greatest problem humanity faces is death. Our gospel provides the solution – life! Jesus said, “I am the resurrection and the life.”

Cling to this most precious and happy truth.