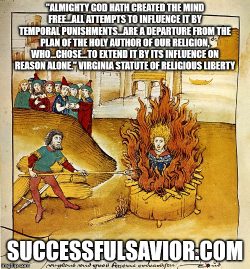 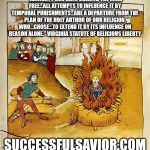 This audio concludes part one of our series on the Plain Guide to Universalism – “Who Are Universalists?”

Hell was a pillar of ecclesiastical tyranny and a weapon in the hands of contending ecclesiastical groups; they’d anathematize first each other with the threat of hell, and then the rest of the world.

Listen to what Thomas Jefferson said about religious tyranny.  “…that Almighty God hath created the mind free, and manifested his supreme will that free it shall remain by making it altogether insusceptible of restraint; that all attempts to influence it by temporal punishments…or by civil incapacitations, tend only to beget habits of …” The rest is in the audio.

Listen to, Truth Promoted by Force vs. Reason