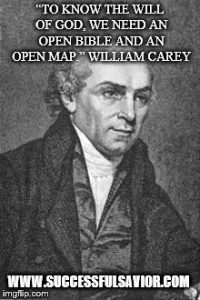 Faith’s Realm: Mankind and Its Endeavors – By Daniel W. Sheridan (Twitter: @DanielWSheridan)
Christianity is intimately associated with scholarship and providing for the general welfare. Faith in Christ always leads to learning and practical living. The history of missions in the far-illustrates this living faith.
William Carey, the “Father of Modern Missions,” went to India with the goal of translating the Bible into every Asian language. He wrote grammar books for a number of Asian languages, and Carey’s friends translated Western literature into Asian languages and Asian works into English.
Henry Martin carried the gospel to the Hindus and Muslims, established educational institutions, and translated the New Testament into three languages.
An Indian Prince wrote this in response:
“Where did the English-speaking people get all their intelligence, and energy, and cleverness, and power? It is their Bible that gives it to them. And now they bring it to us and say, ‘This is what raised us. Take it and raise yourselves.’ THEY DO NOT FORCE IT UPON US, as the Mohammedans did the Koran, but they BRING IT IN LOVE, and translate it into our languages, and lay it before us and say, ‘Look at it, read it, examine it, and see if it is not good.’”

As a result of Christian missionary work, many languages were committed to writing and Biblical literature was disseminated among the people. Schools were opened, health-care provided, and the status of women was improved.

In China, Robert Morrison created a Chinese dictionary and translated the Bible into Chinese. Historian Kenneth Scott Latourette, in his History of the Expansion of Christianity, noted that prior to 1914 the best High Schools and Colleges were founded by Chinese Christians.

“They pioneered the introduction of Western medicine, in public health and education, and in the creation of medical and nursing professions which would apply the rapidly advancing medical skills of the Occident. They led in the care of the insane and the blind. They engaged in famine relief. They sought to prevent famines by introducing or developing improved methods of agriculture and forestry, ways of fighting plant and animal disease, and increasing the yields of grains and fruits.”

All these activities were the result of the “love of Christ constraining” believers to serve humanity. Biblical faith leads to action. Believers have a life-giving and life-sustaining faith which touches all aspects of life:

1. Personal
2. Family
3. Education
4. Literature
5. Medicine
6. Science
7. Welfare
The list goes on. There is not a single aspect of life the Savior won’t touch. If He is the Savior of All Mankind, that means He’s the Savior of All Mankind’s endeavors and institutions as well.
You don’t need to travel to distant lands, however, to imitate these missionary works. Just give all that you are and have to Christ. Open yours eyes. Look around you. Be sensitively aware of the people around you. There are needs everywhere which we can fill in the name of our awesome, wonderful, and successful Savior of All Mankind!
“To know the will of God, we need an open Bible and an open map.” – William Carey
You have a Bible, you have your knees, use them! Christ is worth it!