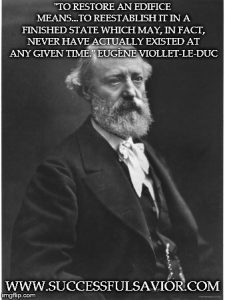 The Best Definition Of “Restoration” Brought To You By A Man Outside The Restoration Establishment… By Daniel W. Sheridan #Bible #SuccessfulSavior #Love #Joy #Peace #Jesus #Cathedrals #Architecture

Gothic Cathedrals, created in the eleventh and twelfth centuries, have graced the landscapes of Europe. Like all human structures, they’ve faced the ravages of time. Cathedrals were damaged by weather, war, and neglect, the most damage being caused by the French Revolutionists.

The significant period of cathedral restoration was the middle of the 19th century, and the most excellent restorer was a man by the name of Eugène-Emmanuel Viollet-le-Duc, born in 1814 and died in 1879. Without a formal education in architecture, he undertook the mission of rescuing many of these marvelous buildings. Viollet-le-Duc began his restoration work at the age of 22 with the Abbey of Sainte-Marie-Madeleine in Vezelay. From there, he restored Saint-Denis, the Basilica of Saint-Sernin, Toulouse, the island fortress of Mont-Saint-Michel, and others.

Viollet-le-Duc wrote an enormous dictionary of architectural terms, and the most famous definition he created was for the word “restoration.”

“Both the word and the thing are modern. To restore an edifice means neither to maintain it, nor to repair it, nor to rebuild it. It means to reestablish it in a finished state which may, in fact, never have actually existed at any given time.”

I love that definition, and I think it perfectly describes God’s restoration of humankind. We are not merely brought back to the garden of Eden, but through the work of Christ, we are given MUCH MORE than Adam ever had. Humanity will be “reestablish in a finished state which…never…actually existed at any given time.”

“For if, when we were enemies, we were reconciled to God by the death of his Son, MUCH MORE, being reconciled, we shall be saved by his life… But not as the offence, so also is the free gift. For if through the offence of one many be dead, MUCH MORE the grace of God, and the gift by grace, which is by one man, Jesus Christ, hath abounded unto many… For if by one man’s offence death reigned by one; MUCH MORE they which receive abundance of grace and of the gift of righteousness shall reign in life by one, Jesus Christ… Moreover the law entered, that the offence might abound. But where sin abounded, grace did MUCH MORE abound…”